Hi friends, on this site there are a couple of articles in English:

2. Guide to the Supercard cartridge.

To buy an original Game boy Advance SP , you need to know how it differs from fakes. It does not matter whether the Game boy Advance SP is used or new, as a rule, fakes work poorly (despite the almost 20-year-old console) and the gaming experience on them is as bad as possible.

Of course, we will not take such consoles as GameBox or DVTech for which it is so clear that they are fakes, but we will consider an option that completely copies the original Game Boy Advance SP.
(Please note that all pictures can be clicked to enlarge and look closer).

For example, take the original Game Boy Advance SP and its fake: 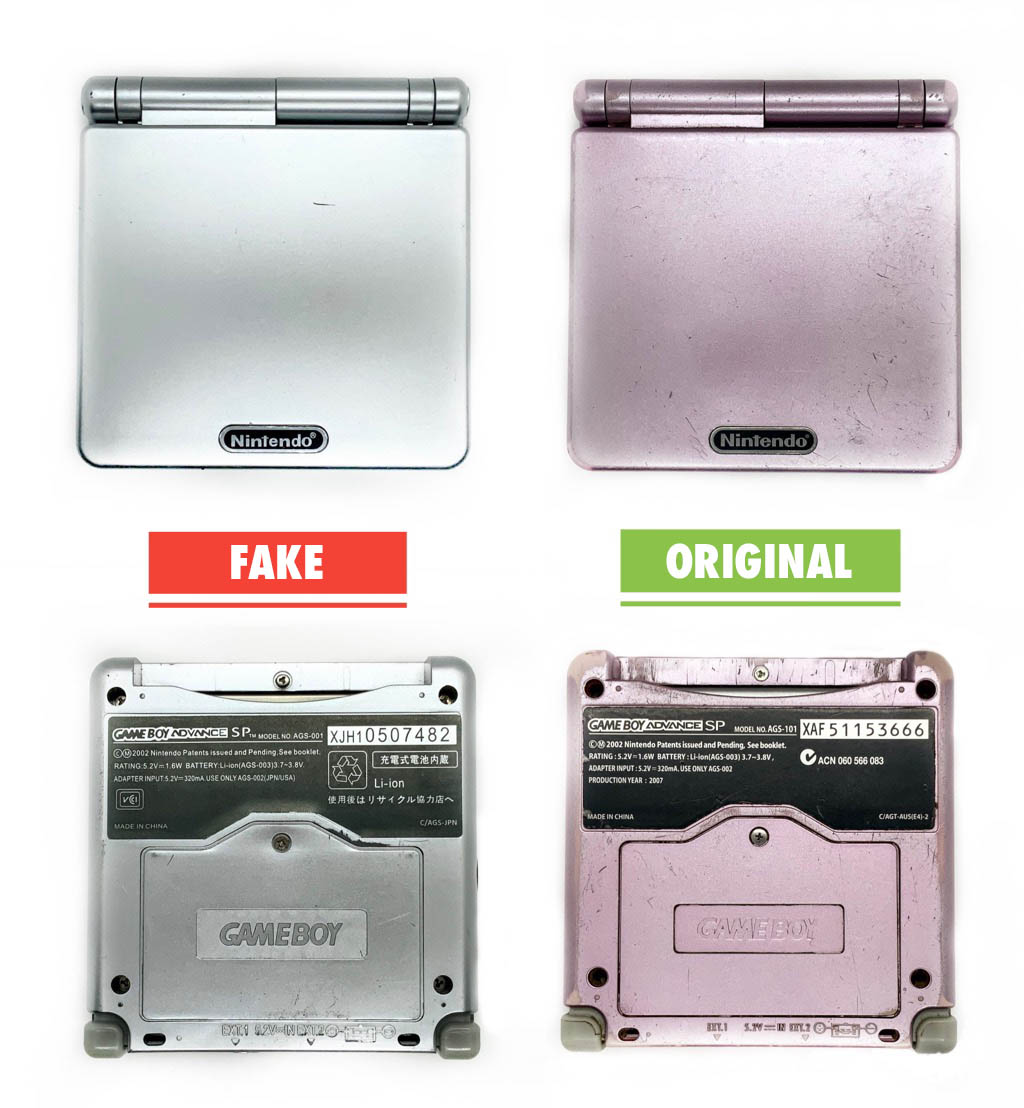 If you don't look closely, then at first glance there is no difference. They are the same size, have the same connectors and even the same labels. However, as you know, the devil is in the little things. For understanding, gray is a fake, and pink is the original.

The first thing to pay attention to is the inscriptions. On the original Game Boy Advance SP, they are beautiful and even, and on the fake, accordingly, curves.

Now consider the inscription on the back:

As you can see, although the inscriptions are completely duplicated, but on a fake the inscription is much larger in size, takes up almost half of the space, and on the original Game Boy Advance SP it is small and neat.

But the most important thing is that this inscription is actually a signature for the connectors and on the original Game Boy Advance SP the arrows are in the middle of the connector, and on a fake it is shifted to the edge of the connector.

Let's move on to the sticker on the back of the case. 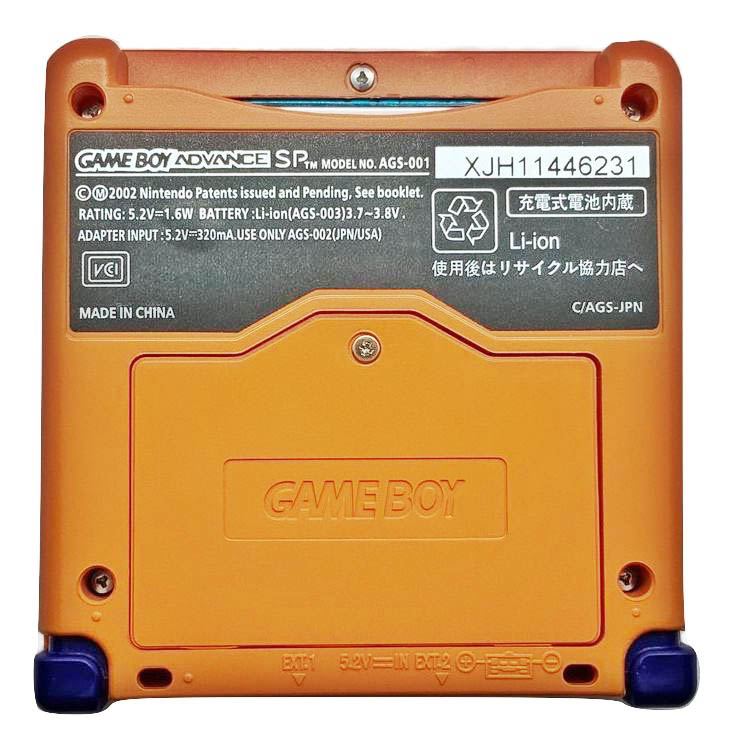 By itself, this sticker does not say (mean) anything, because it is copied from the original sticker. However, for some reason, most of the fakes come with with this sticker, so if you saw it, then this is at least a reason to think about it and check the other signs of a fake.

The original Game Boy Advance SP does not and cannot have any built-in games. So if you see that there are built-in games on the Gameboy, then this is 100% fake. This is the only 100% sign by which you can distinguish the original Game Boy Advance SP from a fake, all other signs may vary depending on the straightness of the hands of those who counterfeit the console. 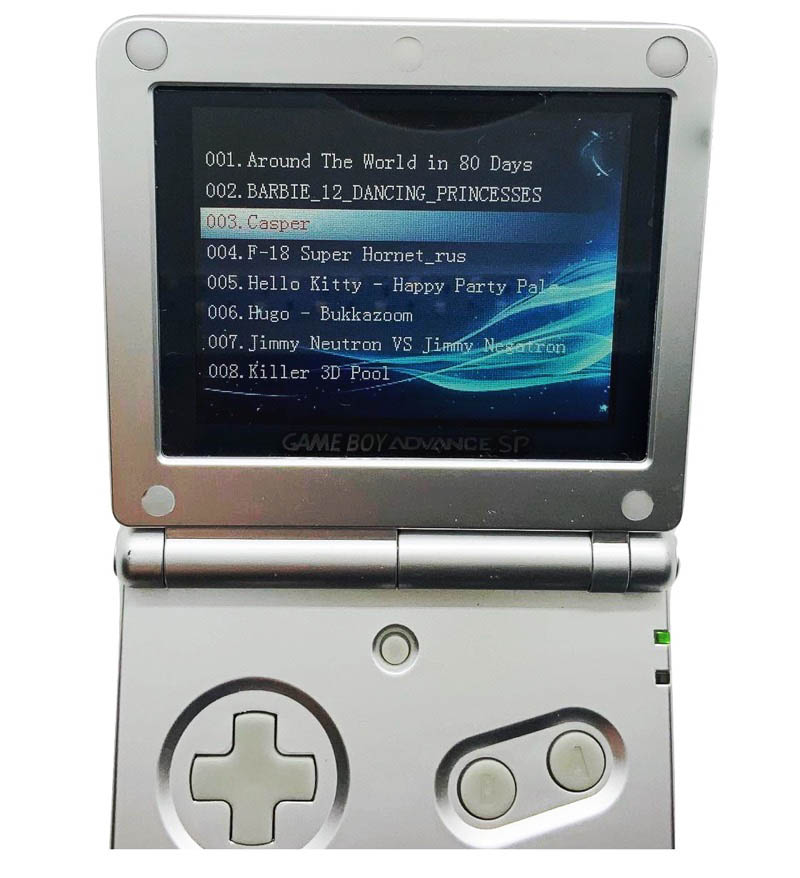 Fakes often have other connectors, for example mini USB or just USB, so if you see something like that, then it's definitely a fake.

Photo from the Internet.

Let's take a look at the original connectors and switches from every angle. They should look like this:

Are flash cartridges launched on fake?

The answer is no. They do not start, the most likely explanation is that fakes work on emulators, while they are launched on the original.

The answer is no. They won't start.

What is IQUE Game boy Advance SP? Is it original or fake? 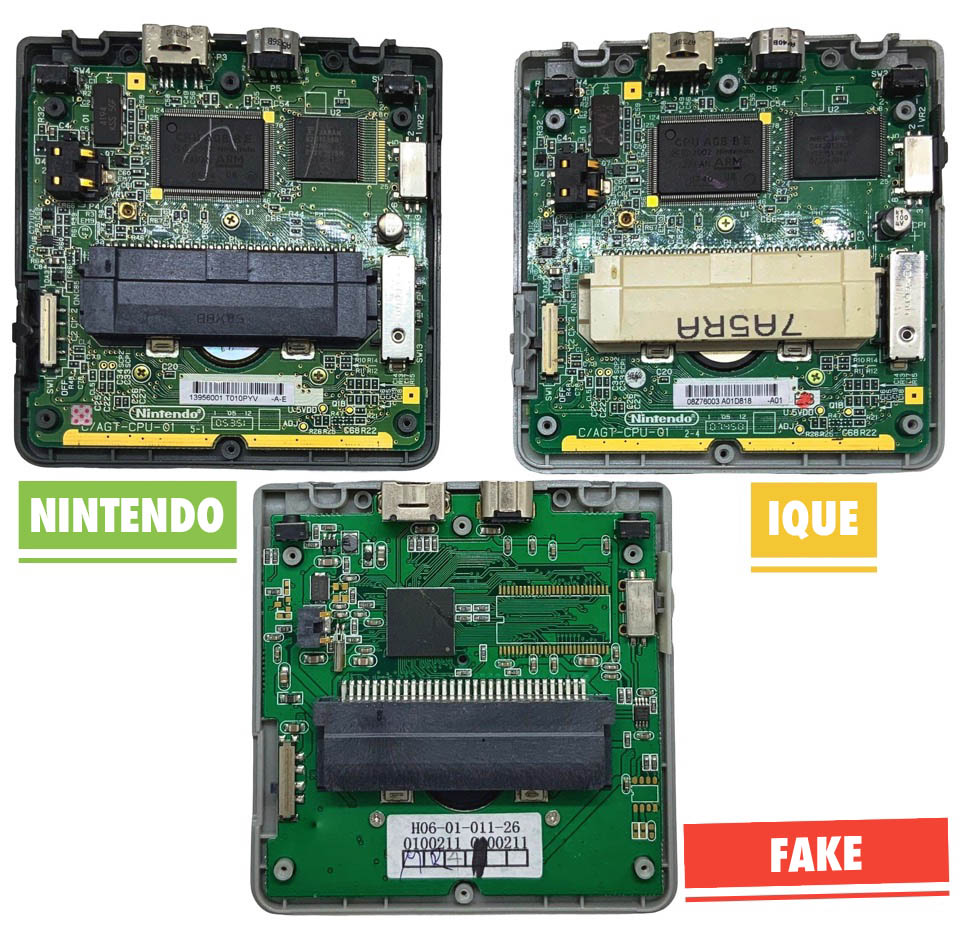 To distinguish a fake Game boy Advance SP from the original, you need to look at everything in a comprehensive manner. On my fake it was possible to understand that this was not the original just by turning it on, the starting animation of the loading was so stupid that it was clear that this was a cheap clone, and after the download and the list of games appeared, everything became clear. Therefore, the first step is to turn on the prefix and see what happens. The game should stop at this picture (original on the left, and fake on the right): 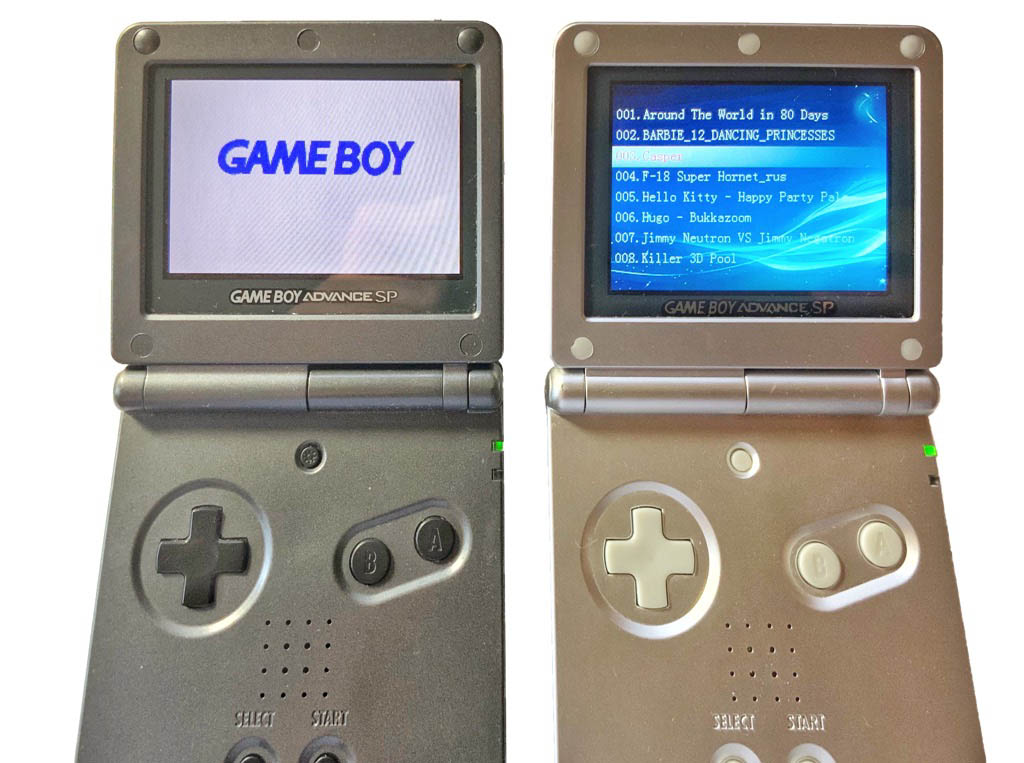 After this picture, nothing should happen. That is, the console cannot do anything without a cartridge.

The second step is to look at the ports, whether there are USB or other unaccounted ports (AUX for example).

The third step is to look at the inscriptions from point one.

And finally, if you have a Flash cartridge, then launch it.